Songs from the Ground 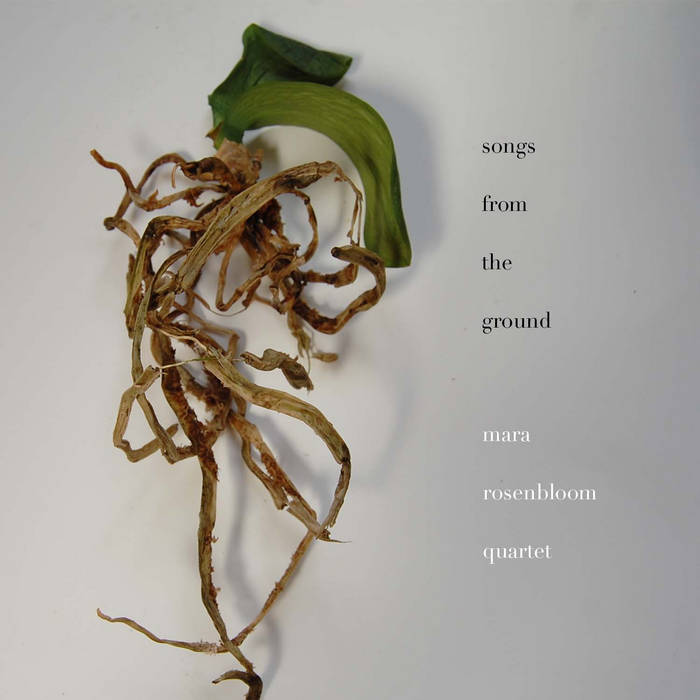 Lamine Sometimes there's no word to express what we feel. This title "Songs from the Ground" sounds like that.Deep inside
Thanks :-)) Favorite track: Whistle Stop.

Pianist/compser Mara Rosenbloom digs deep into the fertile soil of her own personal history on her second release as a leader, Songs From the Ground (Fresh Sound New Talent). The album, Rosenbloom explains, is all about connecting with her roots – “Not just the roots of where I come from physically, but the seeds of my musical inspiration.”

Those roots furrow through richly-layered terrain for an artist at such an early stage of her development. Songs From the Ground unearths stories of home, family, childhood, memory, wistful nostalgia and
personal trauma; the music reaches ambitiously forward while maintaining a grounded folk simplicity. Rosenbloom’s compositions reveal an intellectual curiosity which has never lost a childlike sense of wonder, a mature sensibility combining narrative scope with direct emotional expression.

Tilling that ground alongside Rosenbloom is her longstanding, highly attuned quartet – saxophonist Darius Jones, bassist Sean Conly, and drummer Nick Anderson. Both Jones and Anderson studied with Rosenbloom at New York University, and the saxophonist brings his own ruggedly soulful approach to the pianist’s heartfelt compositions.

“Nobody plays this music like Darius,” Rosenbloom says. “Nobody can play a melody like him. These are intuitive melodies, but he internalizes them and plays them as if he’s written them. That’s a rare quality.”

Of the quartet, Rosenbloom says “I didn't want people who would just play what’s on the page or bow to whatever I wrote. I wanted a band that would make the music their own and bring their own personalities to the table. To me, that’s what’s special about this music in general.”

The two solo improvisations, “Relief” and “to be alone” provide a glimpse into the pianist’s compositional
process, revealing her music in its raw essence. “They add a very personal voice to the record,” Rosenbloom says. “You keep these ideas bottled inside you for who knows how long, so those pieces really express the relief of sending your stories out into the world.”

Many of those stories relate directly to Rosenbloom’s family, her mother in particular. “Whistle Stop” was inspired by the 1991 film Fried Green Tomatoes (the full title of the novel on which the movie was based is “Fried Green Tomatoes at the Whistle Stop Café), which she and her mother watched together often. The pianist’s opening rumble approximates an approaching train, and the piece deals with the familiar contradictions of home. “It’s about being in a situation where you feel intensely compelled to stay and intensely want to run away at the same time,” Rosenbloom explains.

The tune’s sound was also subliminally inspired by Thomas Newman’s soundtrack for the film. Similarly, the coda of the album’s closing title track draws on a song from Carole King’s soundtrack for the children’s film Really Rosie – though it’s actually an interpretation of Rosenbloom’s memory of her mother singing and playing the song at her own piano, filtering the original through a prism of memory and emotion.

“Small Finds” is an intimate portrait of childhood discovery. The title, Rosenbloom says, refers to “things that you find that remind you to be curious, that remind you to be like a little kid. A little mushroom growing under a tree or a penny on the road.” There are larger discoveries to be found in pieces like “Unison” and “Common Language,” both of which stem from a desire to forge profound connections with her fellow musicians. “Unison” was inspired by one of her mentors, avant-garde bassist Lisle Ellis, who yearns to reach an understanding where two artists could improvise in unison at length.

“What if we could work towards becoming so in tune with each other,” poses Rosenbloom, “that even in a completely improvised moment or amidst chaotic surroundings we might share the same moment of inspiration, a simple melody discovered at exactly the same time? "I imagine it would be like flying, probably the most amazing feeling ever.”

While Songs From the Ground is redolent of the soil in which its sounds and emotions were grown, Rosenbloom constantly strives to lift off from that familiar earth and soar free.

All Compositions by Mara Rosenbloom (ASCAP)

Bandcamp Daily  your guide to the world of Bandcamp

Featuring interviews with the mighty Hiatus Kaiyote and genre-busting L'Rain.